Welcome to My Nightmare Special Edition 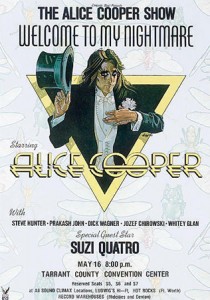 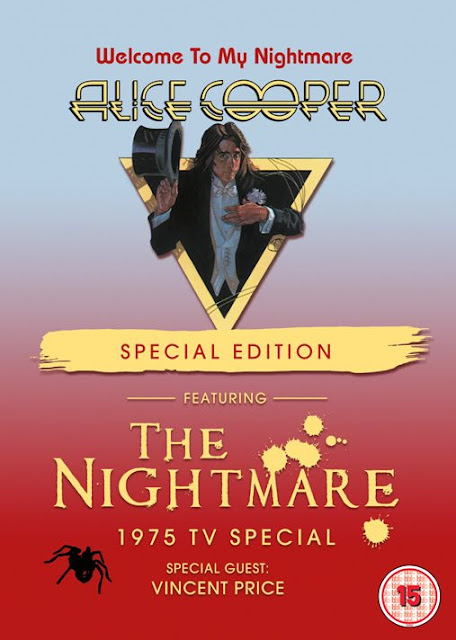 
Review by Joe ViglioneCopyright (C)2017 all rights reserved
Alice Cooper, when he re-emerged from the ashes of the Alice Cooper Group, backed by Lou Reed’s Rock ‘n’ Roll Animal band, was a major event.
How do you top the edgy excitement of the original Cooper five which probably felt as abandoned as Big Brother and the Holding Company once Janis Joplin left for the Kozmic Blues tour?   The Cooper clan, like Big Brother, was a special unit, but Hunter/Wagner were their own touring equivalent of the famed Wrecking Crew, perhaps only equaled by Janis Joplin’s Pearl set of musicians, the Full Tilt Boogie Band.   These were the musical equivalent of cosmic storms that come by once in a lifetime.  Cooper had the right combination in mind for this tour, as exhibited on this DVD, it was simply that his change in direction for his fan base that was more of a jolt than Joplin fronting a kinda sorta clone of Blood, Sweat and Tears.
The Welcome to My Nightmare musicians – Steve Hunter and Dick Wagner  – were a larger-than-life presence, and as potent as Keith Richards / Mick Taylor, making for the two best rock and roll guitar duos on the planet.   And though the Kozmic Blues was to this critic’s ears an amazing transformation for Janis (yes, I’m a huge Big Brother fan too, for different musical reasons,) it was the songwriting on Welcome To My Nightmare that took itself too seriously and veered off from the specialized rock that was generated on the Love it to Death and Killer albums by Cooper, as easy a comparison to make as Jethro Tull’s Aqualung vs Ian Anderson’s concept, The Passion Play.   Do you want to hear Passion Play or Aqualung?  It’s as rhetorical a question as asking if you want to spin Love it to Death and/or Killer over Nightmare.
Alice Cooper gets an A for effort with both the cinema release of the Wembley Stadium shows and the television movie, but where Lou Reed revisited the Velvet Underground, the tried and true “new” band (as in Lou’s band -Hunter, Wagner, Glan and Prakash John replacing Peter Walsh)  bringing the Killer album  to life on the big screen would have been a sure-fire hit…and far more welcome for this writer/reviewer and millions of fans as well.

As a concept Welcome/Nightmare’s script was the actual misfire in 1975 and this supporter/advocate/disciple of both Cooper and Reed feels the same (semi disappointed) way today as when I first purchased the album and then saw the show at the Boston Garden April 24, 1975.  But having the performances professionally recorded and preserved give that A for effort an A plus for posterity. “Only Women Bleed” shows what a gifted singer Alice is, the ability to play to a rock crowd with growls and screams, and middle of the road radio with a hybrid of Perry Como and Mick Jagger, competing with Kenny Rogers, Helen Reddy and the Bee Gees on the soft rock airwaves.

This TV special airing three years after Alice’s mesmerizing performance on the very first In Concert ABC special in November of 1972, is – as stated – historic, but lacks the excitement of both that amazing first In Concert special where Cooper’s riveting extended “I’m 18” (as the band was said to have originally performed it before it was truncated for Top 40 radio) certainly ushered in the new ABC concert show on Friday nights with more than a proverbial bang.  It’s just that the Broadway feel of “Welcome to my Nightmare (the song) was not what the fan base expected; it reflects Alice’s love of films (West Side Story in particular, screen version from the 1950’s play of the same name) as with the original Cooper group  invoking Leonard Bernstein and Stephen Sondheim’s “Jet Song” (“Gutter Cat vs The Jets,” on School’s Out) – it was outside of their  ”sphere of operations,” if you will, and not what Warner Brothers was promoting to the world.  (Nightmare was released on the Atlantic label rather than Warner, a change of labels but still under the WEA umbrella.)
As I review this forty two years later the best tracks on Welcome to My Nightmare live are “No More Mr. Nice Guy,” “I’m 18,” “Billion Dollar Babies,” and “School’s Out” as re-interpreted by the Lou Reed band, a group that did the same for the music of the Velvet Underground with Reed in 1973, two years prior. The fluid guitars of Hunter and Wagner on “Billion Dollar Babies” are as eloquent as they were with Reed in Sheffield at Oval Hall, September 9, 1973.  Find the tape on YouTube or Wolfsgang’s Vault, very worth listening to, especially if you want to explore the nuances of this DVD and its musical pedigree.   With two years and a week on the road, the band that was magnificent when it first launched with Reed, September 1, 1973, is efficient, but more restrained by the cinematic and television duties.
My favorite all-time concert today is still the very first gig by this “Rock n Roll Animal” group – the September 1, 1973 Lenox Massachusetts (Berkshire county) show where Wagner/Hunter and Reed put on an explosive, experimental night that was a once in a lifetime experience.  The sun setting at the Lenox Music Inn  (see the Inn’s history here: http://www.musicinn.org/1970s-concert-schedule.html  ) and this band that emerged from the Berlin sessions, augmented with Peter “Pops” Walsh of Seatrain on the bass, Steve Hunter on guitar,  the late Dick Wagner (RIP July 30, 2014) on guitar, the late Pentti “Whitey” Glan on drums (RIP Nov 7, 2017) and – most likely at this show – the late Ray Colcord (Feb 5  2016) on keyboards.  With the passing of Lou Reed October 27, 2013 – (his wake December 13, 2013 at the Apollo Theater)   it is important to get the history of this unique and inspiring / influential crew documented properly. Would John Cougar ever have even put together his 1978 Australian hit “I Need a Lover” in the fashion that we know it without “Intro/Sweet Jane” from the 1974 Rock n Roll Animal album?  (as recorded in New York on December 21, 1973 – two days after the Boston show – see Cougar-Mellencamp information here: https://en.wikipedia.org/wiki/I_Need_a_Lover )
The ultraviolet lamp on Lou’s face as the twilight descended on the open-air venue, folk and slide guitar renditions of “Pale Blue Eyes” and “I’ll Be Your Mirror” from the Velvet Underground, a folk version of “Heroin” which had the band enter and start building over Lou’s simple guitar strums into an explosive unit, so much more exciting and involved (and complex) than when the band returned to Boston on December 19, 1973 – two nights before the recording of Rock and Roll Animal at Howard Stein’s Academy of Music in New York, it was a sort of a let down.  Sure, the concert was great, RR Animal went gold in 1978 (must be platinum now?) – as did Welcome to My Nightmare – which did go platinum as the sales increased. Ultimate Classic Rock notes that the  “Nightmare” critics at the onset weren’t as thrilled about the transition …but have warmed up over the years.     http://ultimateclassicrock.com/alice-cooper-welcome-to-my-nightmare/    This critic hasn’t…it still is not the first Cooper lp I will pull out of the vault to play for fun…

BUT…with so many great Alice Cooper DVDs out there covering his amazing theatrics, having a true Halloween movie such as Welcome to My Nightmare is essential.   Even if the concert footage directed by David Winters comes off somewhat awkwardly like Rollin Binzer’s direction of Ladies and Gentlemen The Rolling Stones (also on Eagle Rock) –  which, as with my first thoughts seeing that film in theatrical release, is good but not great.

So too with Welcome to my Nightmare, more important to me as a moment in Cooper time than something to watch repeatedly, but not to be quibbled with too much: it did inspire Michael Jackson to put Vincent Price on his Halloween film, Thriller, did it not?

Space age megalomaniacs with ingenious mechanical marvels and fancy ancient titles, from The First Order to Supreme Leader – facing off against a dwindling resistance, the Rebellion, with odds stacked heavily against the good guys, making for an exciting roller coaster ride of things blowing up, spaceships digitally disappearing and re-appearing at will, with deep colors drenching the screen in a variety of shades. Welcome to the very precise re-shaping of the Star Wars legacy courtesy of the Walt Disney Corporation, a dark, desperate saga that hits the home run the fan base and the general public are both looking for.
The film is a thrilling, looming monster, and that’s a monster in a good way.
This is a movie about the grandson of Darth Vader, and given that there’s no James Earl Jones or Alec Guinness, it is the legacy of the chronicle that sustains the magic featuring the established stars in the series. Mark Hamill and Carrie Fisher are, naturally, front and center – their last time together unless computer-generated imagery comes into play for future episodes. Keep in mind that Hamill was 26 when STAR WARS: A New Hope launched in 1977, which makes him 66 as of this writing (December 12, 2017.) The late Carrie Fisher was sixty and two months when she passed December 27, 2016, and that they – along with 71 year old Anthony Daniels (C-3PO,) 73 year old Peter Mayhew as Chebacca, the Millennium Falcon and R2-D2 …and Yoda…are the last remnants of the rebellious first initiates makes for an intriguing passing of the torch to the new personalities being established in the Star Wars canon. Kenny Baker, the original R2-D2, passed in August of 2016, four months before Fisher, and in The Last Jedi Jimmy Vee replaces Baker. Vee is known for performing as Gringott’s Goblin in Harry Potter and the Sorcerer’s Stone as well as some Dr. Who characters. Nice to keep the fantasy/science fiction fans happy with their treasured heritage.
Rather than bringing in too many larger-than-life stars as Lucas did with Christopher Lee in the prequels, we have Laura Dern (the original Jurassic Park, 1993) playing Vice Admiral Amilyn Holdo as well as Joseph Gordon-Leavitt’s voice somewhere in the film. As with Carrie Fisher, Dern’s parents were in the movies while Gordon-Leavitt was a child star, so there is film history in their DNA, but the point is that it is the Star Wars machine itself that is the bright light that all involved get to follow.
There are some historical “Easter eggs,” if you will, from both real life and the film world, as Supreme Leader Snoke channels former Texas Senator Lloyd Bentsen’s immortal JFK line to Dan Quayle: “You’re no Vader, you’re just a child in a mask.”  (“Senator, you’re no Jack Kennedy” was a remark made during the 1988 United States vice-presidential debate by Democratic vice-presidential candidate Senator Lloyd Bentsen)

And yes, Andy Serkis is a big star from The Hobbitt, The Lord of the Rings, Ulysses Klaue in the Avengers, Caesar in the Planet of the Apes films, so my comment about not having huge names to keep the fires burning is arguable and welcomes debate, fans of Daisy Ridley, Adam Driver, Oscar Isaac and the rest of Star Wars: The Next Generation. The Easter eggs continue with references to the Matrix and Keanu Reeves – Maz Kanata, the magical little female creature with the glasses, channeling the Oracle from the Matrix with her words, the Rebellion pushed smack dab into the middle of Zion. It could not be any more obvious under Rian Johnson’s direction and script, and it is more intentional science fiction crossover fun than any kind of plagiarism. Heck, in the original Independence Day Bill Pullman gives an exact quote from C-3PO to Brett Spiner of The Next Generation “Exciting is hardly a word I would choose to describe it.” Sci-Fi fans love the nuances tucked in to other films, the trading-card thread that keeps the ball rolling…in a good way.